[PDF] It's Better Than It Looks: Reasons for Optimism in an Age of Fear download

It's Better Than It Looks: Reasons for Optimism in an Age of Fear. Gregg Easterbrook 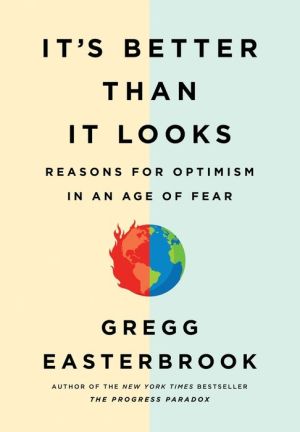 Download It's Better Than It Looks: Reasons for Optimism in an Age of Fear

It's Better Than It Looks: Reasons for Optimism in an Age of Fear by Gregg Easterbrook
Publisher: PublicAffairs

Is civilization teetering on the edge of a cliff? Or are we just climbing higher than ever? Most people who read the news would tell you that 2017 is one of the worst years in recent memory. We're facing a series of deeply troubling, even existential problems: fascism, terrorism, environmental collapse, racial and economic inequality, and more. Yet this narrative misses something important: by almost every meaningful measure, the modern world is better than it ever has been. In the United States, disease, crime, discrimination, and most forms of pollution are in long-term decline, while longevity and education keep rising and economic indicators are better than in any past generation. Worldwide, malnutrition and extreme poverty are at historic lows, and the risk of dying by war or violence is the lowest in human history. It's not a coincidence that we're confused--our perspectives on the world are blurred by the rise of social media, the machinations of politicians, and our own biases. Meanwhile, political reforms like the Clean Air Act and technological innovations like the hybridization of wheat have saved huge numbers of lives. In that optimistic spirit, Easterbrook offers specific policy reforms to address climate change, inequality, and other problems, and reminds us that there is real hope in conquering such challenges. In an age of discord and fear-mongering, It's Better Than It Looks will profoundly change your perspective on who we are, where we're headed, and what we're capable of.